Women offer their significant effort in the research and evolution of TEC-MED program either as official partners or contributing with their valuable experience in several aspects.

Mrs Xenou is one of them, who contributed with an interview to the completion of the part 3.2.1 of WP3, titled “Standard of social care of the country”.  The gathered information of the interviews in total formed the basis for the development of a social care model for the Elderly in Greece. 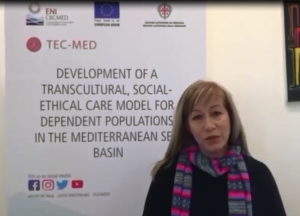 Mrs Xenou is director of Health and Social welfare, specifically she is responsible for accompanying metering questions. The organization she works for is considered as acts in regional level. As a member of the European Working Group Against Social Exclusion and relevant actions, her opinion is crucial on the evolution of the research. What she strongly highlighted is the priorities of the needs of the Elderly who face with social exclusion. Her exact thematology was :

As the priorities of social politics are concerned she explicitly stated   “Social politics should have clear orientation towards the elimination of social inequalities”.  Referring to the caregivers, both formal and informal, Mrs Xenou emphasizes on the strength of the coexistence of informal and formal caregivers with main goal a holistic approach to social protection for the elderly. Her position according to the technological solutions adopted in Greece, reveals the prevailed digital hush and the need for updating and promoting e-health at the level of long-term care. Reaching the end of the interview, we focused on what an ideal platform for the implementation of the social care model should include. Mrs Xenou said characteristically: “Clinical archiving, self-care, training, empowerment and close collaboration of caregivers and caregivers are essential for self-management of their health and independent living”.